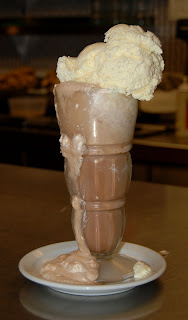 Email ThisBlogThis!Share to TwitterShare to FacebookShare to Pinterest
Labels: pictures 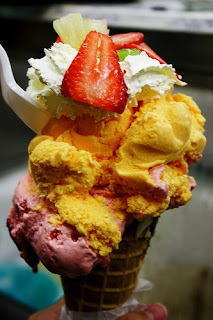 Connie asked me what I wanted, to which I replied, "Surprise me!" I will never say that again. I have no idea what this is, or if it was 100% edible. I only got passed the first scoop. I think it was strawberries, pineapple, mint, jellybeans, rasberry ripple ice cream, mango ice cream, and whipped cream.
Posted by Trent dW at 6:57 PM 1 comment:

Getting to Know Me

So, I was talking to Connie about my blog today and gained some wonderful advice during our conversation. She told me that a great way to improve a blog is to write about 1. topics close to me 2. talk more to your readers. Well, I've written a great deal about myself so far, so I have chosen #2. Please e-mail me (link to e-mail is in my profile) or Facebook me (profile picture is pi) and pepper me with questions. Or, if you have advice for my blog or even want me to write a shout-out to you, that would be cool. I also just got a new camera and would love a chance to use it. Let me know what things and/or places of Odyssey you want to see and I will post them here and on my Facebook page for you to look at. I'll call it the "Eyes of Odyssey"!

That is all for tonight!

So, my birthday bash was great. I had so much fun with my friends and Mom took lots of pictures. But, while we were in the Bahamas, I realized something important. I noticed how much poverty there is in countries like the Bahamas. Then I thought of how many people down there are lost and without salvation. It was all very moving. I think God might be pulling me towards the mission feild. I always pictured myself as a famous writer or a successful politician, but perhaps this is what God wants for me. I'm going to ask Pastor Brown about the next churh mission trip. Maybe I can go too.

Ok, so most of you guess it with the poll. I am going on my first cruise for my birthday!! My parents said I could take 3 friends. I am going with Liz, Marvin, and Mandy!!! Jared can't come because he has "work" in DC (at least that's where he "says" he is). This should be great! It's only for two days, but it should be fun. Please keep us in your prayers as we travel. I'lll post more when I get back.

I love this one. If you are feeling discouraged about something, or if you are trying to reach a goal, this could help.

Somebody said that it couldn’t be done,
But, he with a chuckle replied
That "maybe it couldn’t," but he would be one
Who wouldn’t say so till he’d tried.
So he buckled right in with the trace of a grin
On his face. If he worried he hid it.
He started to sing as he tackled the thing
That couldn’t be done, and he did it.

Somebody scoffed: "Oh, you’ll never do that;
At least no one has done it";
But he took off his coat and he took off his hat,
And the first thing we knew he’d begun it.
With a lift of his chin and a bit of a grin,
Without any doubting or quiddit,
He started to sing as he tackled the thing
That couldn’t be done, and he did it.

Trent dW
I love my friends and my hometown, Odyssey. I have an older brother named Jared. He kinda drives me crazy. Well, he is working in D.C. right now, but that is all I can tell you (oh brother). I have never, yet, had a girlfriend. Though there is a special someone. I love my family and plan to go to a major school after graduation next year. Yup - That's me!!